Term after term, Marlyn Froseth has run largely unopposed for his seat on RTC’s Board of Directors.

“I enjoyed being on the board and I didn’t really have anybody that really wanted to take my place,” Marlyn said. “So I guess that’s how I stayed on so long.”

Marlyn has been a dedicated member of the board since 1978, serving as Chairman from 1989 to 1996 and spending several years as Secretary-Treasurer. Now, after 42 years of service—and at 88 years old—Marlyn has announced that he will be retiring from the board.

“I have been proud to be a part of RTC’s success over the years,” Marlyn said. “It is going to be very hard to leave.”

In his four decades on our Board of Directors, Marlyn has witnessed a revolution not just here at RTC, but in the telecommunications industry as a whole. When Marlyn was first elected in 1978, RTC had just 21 employees and one service offering: telephone. Marlyn oversaw RTC’s expansion into the cable television business in the 1980s, and led the way when we began offering internet service in 1995.

Today, RTC has over 100 employees serving 20 exchanges over 6,000 square miles. We are about 90 percent built out with Fiber-to-the-Home, technology that did not even exist four decades ago.

“When I first got on the board, to get a private phone line was a big deal,” Marlyn said. “I couldn’t have imagined back then what we would become.”

One highlight of Marlyn’s tenure on RTC’s Board of Directors was the acquisition of our Garrison, Kenmare, and Max exchanges. In 1996, US West, one of the seven regional Bell Operating Companies, was looking to sell off some of its smaller properties across the state. Along with Gene Sloane, RTC’s General Manager at the time, Marlyn sat on a committee of 15 rural telephone cooperatives and small independent companies to divide the properties and negotiate a price.

“We had to negotiate with US West for a price that involved 15 different entities. So that got to be quite a process,” Marlyn said. “In the end we purchased those three pieces of property, which almost doubled the size of our cooperative as far as landlines at the time. It made our company quite a bit larger and stronger.”

Over the years, Marlyn has also made more than 20 trips to Washington, D.C. with the Rural Broadband Association (formerly the National Telephone Cooperative Association) to advocate for the rural telecom industry. On these trips, he spoke with legislators about the importance of supporting the Universal Service Funds, a government-administered program to subsidize telephone and broadband services in rural and high-cost areas, for low-income consumers, and for schools, libraries, and healthcare facilities.

All in all, Marlyn considers these trips a success.

“We still have the Universal Service Funds working for us,” Marlyn said. “And personally, it has really broadened my understanding of government and I have been able to meet some really great people. And we’ve had to do some sightseeing—Washington in itself is quite an adventure.”

Onto the Next Chapter

Marlyn’s involvement with RTC is just one chapter in his storied life. A U.S. Air Force veteran and retired farmer, Marlyn has lived in the Kenmare area since 1961. He has served on the Parish Council of Trinity Lutheran Church, the Trinity Kenmare Community Hospital board, and the Norma Co-op Elevator Board, of which he was President for several years. He now drives semi for Skar Trucking, LLC on a part-time basis. He has been married to his beloved wife, LaDonna, for over 65 years, and the two have four children, six grandchildren, and seven great-grandchildren.

We are grateful to Marlyn for sharing this chapter of his life with RTC. Under his leadership, we have created dozens of jobs in our communities, invested in new technologies that no one could have dreamed of four decades ago, and made rural North Dakota more connected than ever before.

While we are thrilled to have two very capable nominees running for his position, we will certainly miss Marlyn on the RTC Board of Directors.

“I couldn’t have enjoyed anything in my life more than being on the board for RTC. It has given me the opportunity to participate in so many things that I never would have had the chance to otherwise, and it has made me a better person,” Marlyn said. “Next to my family, it has been the most important part of my life.”

Thank you, Marlyn, for 42 outstanding years of service to RTC! 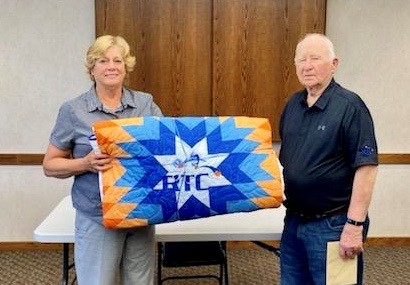