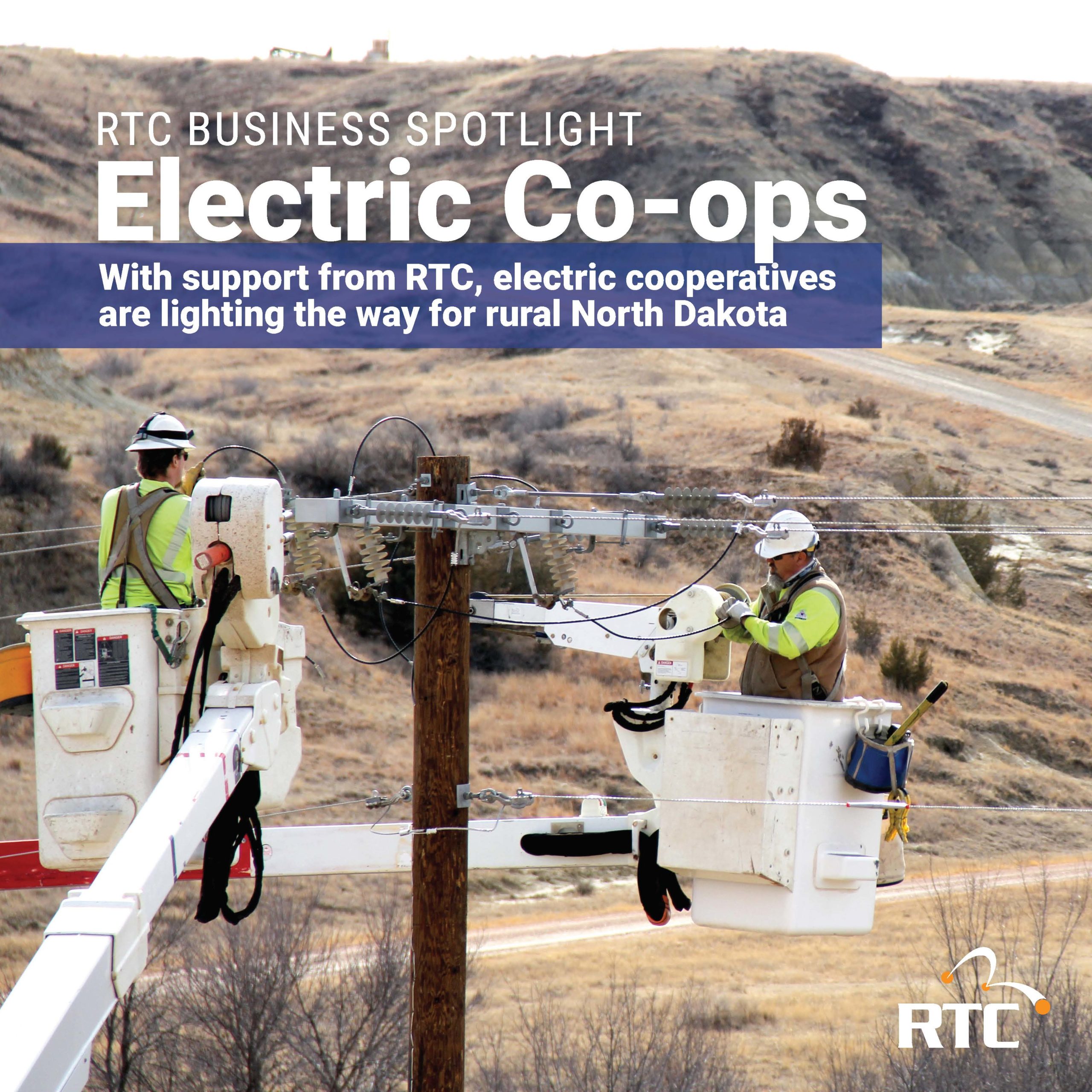 With support from RTC, electric cooperatives are lighting the way for rural North Dakota.

Electric cooperatives have been lighting the way for rural Americans for almost a century, providing power to areas that historically have been hard to serve. And these co-ops aren’t just keeping our lights on; they are bolstering our local economies and bettering the places we live.

In RTC’s service territory alone, we intersect with five electric cooperatives: Burke-Divide, McKenzie, McLean, Mountrail-Williams, and Verendrye. We spoke to their leaders to learn how, with support from RTC, they are continuing to empower the rural North Dakota communities that first empowered them.

“Were it not for cooperatives, the sparsely populated areas of North Dakota would not have the modern services we enjoy today,” said John Skurupey, CEO of McKenzie Electric Cooperative.

Illuminated By the Past

In the early 20th century, electricity was a luxury limited only to large cities and those along major transportation routes. The rest of America was left using kerosene lanterns and wood-burning stoves to cook their meals, light their paths, and warm their homes. Investor-owned utilities chose not to provide service to these rural areas, believing that the expense required would outweigh potential revenue.

Everything changed in 1936, when the Rural Electrification Act (REA) provided federal loans for the installation of electrical distribution systems in isolated areas of the United States.

With this new opportunity, rural residents began to gather in local homes, churches, and city halls to discuss the possibility of bringing power to their communities. Cooperatives like McLean Electric were formed when groups of individuals, paying as little as $5 for their membership, came together with a common goal.

“They wanted to electrify the rural areas. The homesteads, the farmsteads, the ranches, wherever was not being served,” said McLean General Manager Mark Doyle.

While the cost of membership has increased over time, that mission—to provide service for the underserved areas of our state—continues to guide electric cooperatives almost a century later. Because they are owned by their members, not investors, business decisions are based entirely on customer needs—not a bottom line.

“When your members are your owners and you’re providing a critical service which the membership places a high degree of importance on, being able to focus on reliability and lowest possible cost as opposed to increasing revenues translates to better service,” Skurupey said. “We always ask ourselves, ‘what’s in it for the member?’”

Building a Brighter Future, Together

By banding together to bring electricity to their communities, cooperatives make it possible for rural America to stay connected to the rest of the world. But doing what’s best for members goes beyond providing power; across North Dakota, electric cooperatives are bettering their communities through volunteership, financial contributions, and local events.

At Burke-Divide Electric Cooperative, General Manager Jerry King encourages all of his employees to find a way to volunteer in their local community.

“I’ve got volunteer firefighters that work for me, I’ve got mayors, members of economic development committees, park boards—you name it,” King said. “Someone’s got to step up and be the leaders, and that’s what we try to do in the cooperative world: we try to create leaders.”

With 35 employees across Burke Divide’s 3,000-square mile service territory, that is a lot of leaders being made. And they are not stopping with volunteership; King also encourages employees to give back through Operation Round Down, in which they can round their paychecks down to the nearest dollar.

Those extra dollars, along with funds from Operation Round Up (where members have the option to round their electric bill up to the nearest dollar), are donated to local organizations in need,
from food banks to the gymnastics team.

Burke-Divide is not the only cooperative giving back to their members. Randy Hauck, General Manager of Verendrye Electric Cooperative, explains that cooperatives are in a unique position to support their communities financially.

“We have resources available to us through the USDA that other places don’t,” Hauck said. “Things like loan programs or grant programs where we can access funds and help a small community buy a fire truck that they might not be able to get in any other way, unless it’s through a cooperative.”

Verendrye has leveraged these funds to help build a new daycare in Berthold, North Dakota, a small town of under 600 people. Just over an hour away, in New Town, Mountrail-Williams through
the Rural Development Finance Corporation, or RDFC) has provided two $250,000 community capital loans to build a new volunteer fire station and a water park for children.

“That’s a low interest loan. Along with other funding, it just makes it more affordable to make sure that these quality of life projects work,” said Alex Vournas, Chief Operating Officer at Mountrail-Williams. “Through RDFC, we are really filling the gap for rural areas that don’t have their own economic development departments.”

In true cooperative fashion, these leaders know that they can have an even greater impact when they join forces. From flipping burgers before football games to scooping ice cream cones at the State Fair, these electric cooperatives come together to show appreciation for their members.

“We have the same core philosophy,” King said. “As nonprofits, events like these are an opportunity to thank those people that get services from us. Sometimes events can become so big that one co-op can’t do it alone. And it’s always nice to have partners.”

For these cooperatives, one important partner is RTC. In the areas where our service territories intersect, they provide us with power. In return, we supply internet at many of their offices and  substations, allowing them to serve their members faster and with fewer interruptions.

“Our relationship with RTC is symbiotic,” King said. “They provide the technology for us, and we supply electricity for their technology.”

This symbiotic relationship allows coops like Burke-Divide, McKenzie, and Verendrye to equip their meters with smart devices, which can alert their headquarters if the power goes out, show them where the outage originated, and even get it back up and running again without having to drive a truck out to the substation.

These smart devices aren’t just saving time and money; they are providing peace of mind for their members.

“If we have a problem, we can restore power before you even know it is out. It shortens outage times tremendously,” King said. “And that’s important, because when it’s 40 below and the lights aren’t on, getting power back is a matter of keeping people safe.”

In addition to communicating with their meters, electric co-ops rely on the internet to communicate with their members. For McLean Electric, that communication became more essential than ever this February, when disastrous winter weather in the South caused rolling blackouts across the Midwest.

The Western Area Power Administration turned off substations across the region to cope with the increased demand. While McLean’s headquarters did not experience any interruption, there were blackouts in parts of their service territory.

Electric cooperatives like Burke-Divide, McKenzie, McLean, Mountrail-Williams, and Verendrye have been serving the underserved areas of our state for almost a century. Whether we are helping them communicate with their members, collaborating on community improvement projects, or digging trenches side by side to deliver service to the same areas, RTC is proud to serve, and be served by, our fellow co-ops.

“The cooperative family is pretty unique. When I think of broadband cooperatives and electric cooperatives, we carry the same end goal. How can we advance the quality of life for the area that we’re serving? How can we make it better for everyone?” Hauck said. “We’re all in this together.”